0
You have 0 items in your cart
Go To Shopping

When two mechanical engineers, Chandni Mathur and Nikhil Kapur decided to set out on an artistic adventure back in 2011, the city was still new to the concept of custom design and merchandise. Started off as a t-shirt design company, the popularity of house Hoozinc made them the first company in the Telugu States to sell official merchandise of movies and TV shows.

The duo, in 2014, set foot in a Comic Con in Bengaluru to showcase their t-shirts, a few artworks to those at the event. An instant hit, the stall drew attention from an impressed patron fan who decided to commission their first mural. “The architect liked one of our paintings and said he wanted us to do his entire basement in a ‘Star Wars’ theme,” recalls an excited Chandni, the co-founder of Hoozinc.

That is when the partners in art returned to Hyderabad with a hunch that wall art and graffiti might interest those in the home city. Chandini continues, “We were hyped to see people were interested in something like this and wanted to take it further. We approached a couple of people, pitched in the idea of doing wall art in cafes, and they said ‘yes’. As Hyderabad has a very well-connected network, word travelled fast and we began taking up more projects.”After three similar projects, the team was approached by actor Naga Chaitanya to deck up the walls of District N, a place which Hoozinc considers their “big break”. 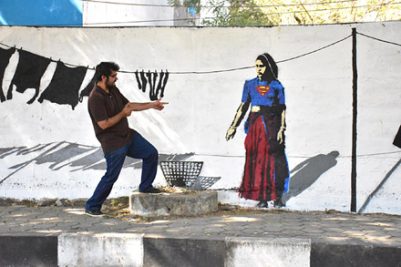 Alongside a fast-paced expansion of art commissions scattered across the city, Hoozinc currently has eyes set on non-commercial projects as well. Having been a part of the Street Art Festival organised by St+art India, Nikhil and Chandni’s graffiti can be seen along Necklace Road, with a major chunk of it inside Maqtha Art District. “Both Green Gully and Blue Lane have our artwork on display; particularly one graffiti named Superwoman fetched us many compliments,” adds the artist who also names ‘Portrait of a Woman’ of receiving rave feedback at Dubai’s art showcase in April this year. 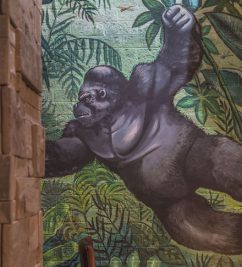 The artists with distinct yet harmonising styles are currently working on a series of paintings on children. “It has only been two years since we began doing non-commercial projects as initially, our focus was more on gaining foothold and stay in the market. Now is the time to work on something that comes more naturally to us. We hope to release them in August,” adds Chandni, fingers crossed.

Hoozinc: Whose ink is it anyway?

From Fine Art and Graffiti, to Photography and Fashion Art at World Art Dubai 2019

Public art gets a new fillip